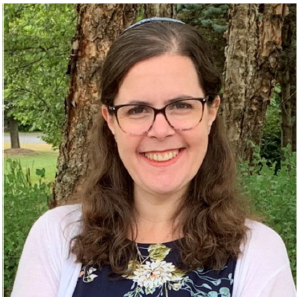 We are honored and excited to welcome Rabbi Jenni Greenspan and her husband Brad to the Beth Shalom family. Beginning July 1, 2022, Rabbi Greenspan will serve as our new Senior Rabbi. She succeeds Rabbi Susan Grossman, who will become Rabbi Emerita after being Beth Shalom’s Senior Rabbi for 25 years.

Rabbi Greenspan received her Master of Arts in Rabbinic Studies and Rabbinic Ordination in 2019 from the Ziegler School of Rabbinic Studies at the American Jewish University and received the Henry Fisher Award for Outstanding Achievement in Jewish Studies. Since 2019, she has served as Assistant Rabbi at Congregation Beth-El Zedeck in Indianapolis, Indiana.

Rabbi Greenspan is a Southern California native and grew up as an active member of the Los Angeles Conservative Jewish community. In her youth, she spent summers at Camp Ramah in California and her school year in USY, serving as Chapter President at Temple Ramah Zion in Northridge, California.

She earned her bachelor’s degree with a double major in Psychology and Feminist Studies with honors from the University of California, Santa Cruz. As a student, she worked with the LGBTQ+ community and served on the committee that worked to ensure that the student health program included coverage for the needs of transgender students.

Rabbi Greenspan returned to Southern California to work for Camp Ramah initially as the Finance Assistant and later found herself drawn to a desire to pursue Jewish leadership and enrolled in the Ziegler School in 2014. While in Rabbinical School, she interned at Adat Ari El of North Hollywood, California, and at Congregation Beth Am of San Diego, California. She continued to spend summers and many weekends working at Camp Ramah and spent six years on the planning committee for Ruach Nashim, Ramah’s Women’s Shabbat retreat.

In her down time, Rabbi Greenspan enjoys knitting, board games, and cooking shows.

Brad Greenspan was born in Eastern Washington State, and moved to San Diego, California at a young age. He received a Bachelor of Arts in Film and Video Production from Brooks Institute of Photography. He has worked in film and television as a camera assistant for seventeen years. In Indianapolis, he also began working as a stage hand. He has been active in IATSE Locals 600 and 30 and chaired the Young Worker’s Committee for Local 600 in Los Angeles.

In his down time, Brad enjoys board games, baking, SCUBA diving, and exploring craft breweries.

Once Rabbi Greenspan arrives, there will be a number of opportunities for congregants to get to know her and to formally welcome her and Brad into the Beth Shalom family. We hope that you will spend time with Rabbi Greenspan and let her know how excited we are to have her join our community.